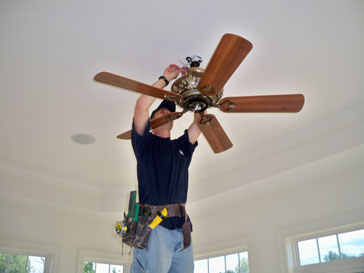 Ceiling fans are a great way to improve your home temperature. Whether you are trying to keep your hose cooler or warm it up a ceiling fan can do both consistently. A ceiling fan works in the warmer months by blowing the air down toward a person and the air mixed with their sweat keeps their skin cooler. With the turn of a switch a ceiling fan can be used during colder months to help draw the cooler air off of the floor and forces the heat to be transferred away from the ceiling. This means that ceiling fans are helpful year-round and can be very helpful to combat high heating costs in the winter months. Ceiling fans are also very useful in smokey or dusty homes and make it so the air is less stuffy by circulating the air you breathe.

Ceiling fans were originally designed by using a turbine that was driven by belts. Water would make the turbine move and the belts were attached to the motor. Then in the 1880’s the motor used to run sewing machines was used to run the first electric ceiling fan. Later, in the 20th-century ceiling fans were attached with light kits, which is generally what we still use today. There have been many improvements to the technology and safety of the ceiling fan and that has been the reason they are still very common in homes today.

Installing a ceiling fan in a home is generally a simple to moderate task. The main concern is having a helpful hand and being sure that you have all the power shut off before beginning any project that involves electricity. Be sure that you are accounting for the main safety features. The main concern is if you have an electrical junction box that can support a ceiling fan. Just because you have a light fixture there does not mean that it will be able to support the weight and movement of a ceiling fan. Please do the necessary homework to be able to be sure that you and your family and guests will be safe. Another of the main safety concerns is the height of the ceiling fan. This safety precaution is a lot more obvious, but be sure the ceiling fan is high enough to account for a full arm extension also. I believe that most laws state 7-feet off of the ground, but be sure to take your family and gusts height into consideration. Remember, safety first!

Tools That You Will Need To Install A Ceiling Fan:

Materials That You Will Need To Install A Ceiling Fan:

Shut Off Power – Shut off power at the circuit breaker box.

Find The Center – If there is no central light fixture, snap diagonal chalk lines from opposite corners of the room to find its center. Determine whether the lines cross exactly below a ceiling joist. If they do, move aside just far enough between the joists to fasten the side of the fan’s new junction box directly to the joist. A stud finder helps here.

Cut Your Hole – Now that you have found center it is time to use your saw and cut a hole big enough for your junction box to fit through. Install the junction box by screwing it onto or into the joist. Be sure to take extra caution that your junction box will support the weight of the fan. If the junction box is plastic do not use it. If your ceiling has bare beams then you will need to buy a kit that you can use to make mounting the fan a much simpler task.

Assemble The Ceiling Fan – Assembling the ceiling fan does differ for each brand, so be sure to check out your instruction manual while doing this to be sure that there are no steps missed with your one particular brand. Assembly of the ceiling fan can be quite complex. First you begin by installing the hanger pipe. The hanger pipe is usually placed into its hole on top of the motor. The wires are then drawn up in the center. A set-screw is tightened securely to make sure the pipe stays in place after it is threaded down. Next you will need to install the fan blades. To do this you will need to have enough room to get a screwdriver from the placement of the blade to the ceiling. If not, this process will be a lot more difficult. To attach the fan blades you set the motor unit down where it will not be able to constantly move while you are attempting to work. Often, the foam packaging for the motor housing can make an excellent stabilizer in your workspace. Most fan blades have a two-pronged attachment, using screws that come through holes in the blades and into the flanges. Make sure not to tighten them up too tight or else you may have an issue. On many fans you’ll find the flanges, or prongs, also need to be mounted to the motor housing. If this is the case, mount them before the flanges are mounted to the blades themselves. See more the video below to learn more about assembling a ceiling fan:

Mounting The Hanger Bracket To The Box – Installation of the hanger bracket is done by using screws and lock washer. Be sure to use lock washers because of the movement and vibrations that are created from the daily usage of a ceiling fan.

Wire The Ceiling Fan – To wire the ceiling fan properly you will need to wirenut the black wire from the fan to the black wire from your house. Do the exact same with the white wire. Next we ground the fan to the box using the green or bare copper wire. I always tape up all the wirenuts upon completion too. If there are any questions here be sure to ask an electrician because electricity is nothing you want to just take an educated guess on.

Turn the breaker back on and hope for the best. If the fan wobbles that may mean that is not balanced correctly. If you run into this problem the easiest way to resolve is by exchanging different fan blades with each other until eventually they may be counterbalancing.